WARNING, this may include spoilers for the fan-fictions, A Fading Star will Rise Again and A New Hope, read with caution!

Blue
Esteria is a female titanwing new Night Fury born with royal blood, as her parents were King and Queen. She gained her titanwing form in a battle when she was young, as she defended her young friend Nightfall from a Snow Wraith ambush when they were exploring.

She spends the majority of her life in her natural home, The Shadows, a darker and colder environment that the new Night Furies reside within. Though she does accompany her Father and Mother on their expeditions here and there, giving her a good sense of everything within the Hidden World.

Esteria was born as the only daughter of King Asazin and Queen Twila, making her a blood heir to the position of Alpha. Esteria led a relatively normal life (for a royal heir, that is), until the tragic day when both her parents went on a Hunting Expedition resulting in Queen Twila's death. After her father returned, and the chaos that came after losing a Queen was handled, life went on as normal.

A few days after Esteria had turned 15, her father woke up after a vivid dream he believed was a vision. He claimed that he foresaw the Hidden World collapsing, and he explained this to the kingdom. He began organizing a way for the dragons to slowly leave the Hidden World in order to escape before tragedy, but before he could fulfill any of his plans, the first collapse came.

The Sand Wraiths' hatchery began to crumble, and King Asazin rushed in to help save the eggs, only to be killed as heavy debris crushed him.

This left Esteria to inherit the throne of Queen and Alpha. She decided that the Sand Wraith Hatchery collapse was enough proof that her father was right about the Hidden World's demise. She continued with his work to try and find a way for Dragons to escape tragedy and re-introduce themselves to humans, though it turned out to be much more difficult than she ever could have imagined.

The rest of her story can be found in the fan-fiction, A Fading Star will Rise Again.

Esteria is a very bold dragon who loves adventure, though she has her insecurities. She is a strong leader and good at making big decisions. She does not trust anyone easily and always has her guard up, also being a strong fighter and incredible at stealth attacks, that is, if she can avoid distractions. Esteria is a very easily distracted dragon with a short attention span, which can be found as a weakness.

Esteria's favorite things to do would be flying at night, spending time with friends, or quite often she simply enjoys being alone.

Esteria is very insecure about making mistakes, and tries her hardest to act older than she is. Though when allowed, she shows the playfulness and energy any dragon her age should. She loves the cold and the dark, and especially the moonlight and lightning.

Esteria has the normal Night Fury blasting abilities, including Plasma Blasts and a Lightning Shot.

Esteria has fair vision, pretty average for a dragon's, though her eyesight can be comparatively 'better' than another dragon's in the dark.

Esteria is more of a sprinter than a runner, meaning she can run very fast but she cannot run for long distances.

Esteria is extremely agile and quick on her feet, being aerodynamic and slim. Her reflexes are strong, she is able to dodge obstacles easily, that is if she can keep focus.

Esteria is a very intelligent dragon, much like Toothless was. She also has a 'sense' for when trouble may be approaching, and she knows how to react rationally.

Esteria is somewhat strong, she has a semi-powerful jaw and can lift her own weight, but not much more.

Esteria is extremely stealthy in the dark, she can fly and walk silently and almost melt into the shadows. In the daytime, though, she is much more vulnerable as light may make her stand out.

Esteria has razor-sharp retractable spines along her sides and back. These can slice through a dragon's scales with ease.

Being royal and a titanwing, Esteria has glowing markings that she can use to show dominance. She can also control the markings at will, which can provide light for any dragons who might not be able to see in the dark the way she can.

Esteria, as mentioned, is easily distracted. This has ruined several stealth missions and attacks, as well as formal meetings, because she spots something else to focus on. She doesn't have a long attention span either, making it hard to have a long conversation with a dragon who may have concerns for their Queen.

As any Night Fury, Esteria is weaker in the sunlight. It drains her energy, making it so she cannot fly for long, and her shot limit decreases from 6 to 5.

Esteria can withstand heat, and she does have fireproof scales, but if she's standing in fire, holding in a plasma blast, cloaking, or any other thing that might cause her body temperature to rise dramatically, she would be weaker. Extreme heat for long periods of time would have the same effect on her that Direct Sunlight has, draining her energy and decreasing her shot limit. If she's exposed for too long she may pass out.

Esteria has been exposed to death and loss her whole life, but after losing her father, a piece of her essentially broke. If she witnesses a death, even if the creature whose life was lost, grief can overtake her in an extreme way that she cannot control. It's similar to an irrational fear, she cannot control how she reacts, it's like the fear just takes over her body.

Esteria has major trust issues after being betrayed by Eddy, and she's never trusted humans ever since the story of her mother's death. She has a hard time working with unfamiliar dragons and humans because she doesn't believe she can trust anyone. She fears being betrayed by anyone she becomes too close with.

As most dragons, Esteria has a fear of eels as they cause her to be extremely sick.

Esteria, being jet-black and purple, is not super well-hidden or stealthy in the daytime. She can hide well in the shadows, but if she's flying in the sunlight, she's already slower, and additionally visible to any enemies.

Esteria is very loyal and protective of those she calls friends, and would do anything to keep them safe. Often times when someone she doesn't recognize might be even talking to one of her friends, her titan side can "take over" and she enters what Nightfall calls, "battle mode," where she has unnecessary aggression towards another dragon. This makes her easily manipulated by enemies, for if they discover this flaw they can aggrivate her into attacking others.

The King and Queen were Esteria's parents, until each of their unfortunate deaths.

Nightfall is Esteria's best friend since hatchling-hood, and though she's never been 100% sure, she's grown feelings for him as the two mature together.

Birdie is Nightfall's younger sister, and Esteria's treated her as a sibling ever since Birdie was born.

Serenity is a Light Fury that Esteria meets in A Fading Star will Rise Again and A New Hope. The two become close friends and Serenity is left in charge as a temporary Alpha and Queen when Esteria leaves the Hidden World for scouting.

This little Light Howl is Birdie's best friend, and Esteria comes to love her as another little sister.

Eddy is a Tide Glider that convinced Esteria to be in a relationship with him, though his intentions were not for love. He ended up being killed by Nightfall when he attempted to murder Esteria. He was also discovered to be cheating on Esteria with Serenity.

Kaiyō is a Deep Flame who acts as a general/advisor for King Asazin, and after his passing he works for Esteria. He is a close friend of Nightfall and eventually becomes the king after Esteria forfeits the throne to him.

Lyra Stellar is the human that Esteria had to team up with, and the two eventually became close friends, as well as dragon and rider.

Jax Veriscio is a close friend of Lyra's, as well as Ly's 'love interest' and Nightfall's rider.

Ari is Birdie's rider and a neighbor of Lyra's, Esteria quite enjoys hanging out with Katie, Ari, and their dragons.

Esteria is a jet-black new Night Fury with three rows of spines, one along each side and one along her back. Her underbelly is usually purple and her eyes are a vibrant blue. Being born "royal" and being a titanwing, she has glowing yellow "markings" to show dominance, though she can use them at will. These markings are illuminated along all three rows of spines, the upper edges of her wings, the fins on her legs, and in a star shape on her right eye.

Esteria makes her appearances in the fan-fictions, A Fading Star will Rise Again and A New Hope, Sharper Edges, as well as the crossover stories, Shadows Rise, Hearts Fade, A Nadder's Tail Begins, and Stars Never Die. 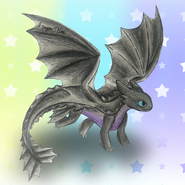